Currently I am a Peace Corps volunteer serving in a small village in Thailand. For the latest updates and pictures of my adventures, please check out my Facebook Page. :)

Hello my friends. Somehow you've found yourself here at WanderingTheWorld.com (also known as jim-wandering). I thought it would helpful to introduce myself so we might begin to understand one another.

I think I've always had 'wandering' feet. In my younger days, that meant lots of reading about far away places, both real and imaginary. But it wasn't until I spent a summer backpacking in Kenya in 1987 that I found the joys of adventure. Other than short trips to Washington DC and San Fransisco, I hadn't ventured far from my hometown of Kansas City. That summer I spent with the National Outdoor Leadership School (NOLS) learning all about the outdoors but also learning about another culture and people of Africa. Besides climbing Mount Kenya, we went on photo safari in the the Serengeti, backpacked with the Maasai, sailed the waters off Lamu, and attended a wedding on Kiwaiyu. After what I experienced with those two months in Kenya, I don't think I would ever be satisfied with a two-week vacation again. 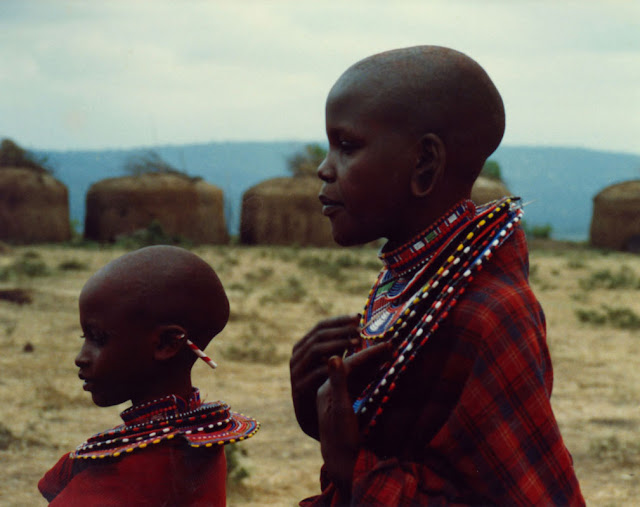 Masai sisters (Kenya)
But then I took a ten year break from the travel to begin my transformation into a 'normal' American, moving on a career path and settling down, leaving my backpacking experiences behind me. Unfortunately it was like putting a square peg into a round hole. I just wasn't adjusting into what everyone else kept telling me was 'right'. Then one day I saw a book called "Walking the Appalachian Trail" by Larry Luxenburg. After just one night of reading I had decided to hike the 2160-mile AT the next year. It was a long year, full of planning, gear selection and training. Took a leave of absence from my job and flew to Atlanta where a friend drove me to the trailhead below Springer Mountain in Georgia.

Even before we reached the first shelter on the AT, we met a few other fellow thruhiker's and I felt 'at home' with this place and these fellow travelers. Even though I was hiking the Appalachians on the East Coast of the USA, many sights and sounds reawakened memories of my time in the bush of Africa. It took me almost 6 months to reach Mount Katahdin in Maine, and by then my 'wanderlust' was firmly established in my soul. [smile] 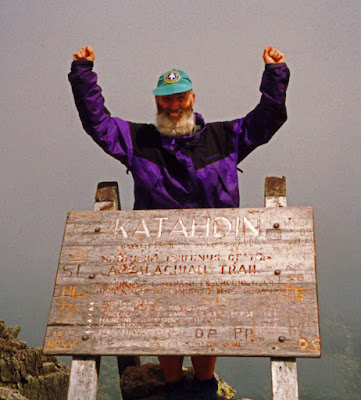 After 2160-miles on the Appalachian Trail
Since then, I've biked 10000-miles across America, walked the St James Pilgrimage across Spain, biked the Lewis & Clark Trail beginning to end, spent months on the Costa del Sol learning Spanish, and biked with friends in New Zealand. My travels took me back to Europe where I again walked the Camino de Santiago, volunteered in a Buddhist monastery, and spent time visiting family and friends in Spain, France, England, Switzerland and Italy. And, after I biked across Canada, I spent the next four years teaching English in Mongolia.

And now, my life is about to enter a new chapter. In January, 2013, I applied for the Peace Corps. After almost 6 months of hearing nothing, I finally received my "official" invitation to serve in Thailand as a Teacher Collaborator and Community Facilitator. Most likely I will be paired with a primary school English teacher in the rural countryside of northern Thailand. I will leave in January, 2014, to begin 3-months of training that will include learning the Thai language and living with a host family. After that, I will be sworn in as a "Peace Corps Volunteer" and begin a 2-year commitment to serve.
2014-2016: Thailand
Peace Corps volunteer in Thailand

1987: Kenya
Backpacking in Kenya with NOLS

Along the Camino near Pamplona (Spain)

Exploring Fox Glacier (New Zealand)
In Mongolia I was an ESL (English as a Second Language) teacher, and for fifteen years before that, I worked as a Physical Therapist Assistant (and before that I was a Mechanical Engineer). When I had a car (now I walk or bike everywhere), I could fit all my belongings into a Honda Civic Hatchback, but rarely drove it (only 70,000 miles after 13 years when I sold it). And still haven't gotten a cell phone because I don't stay anywhere long enough to justify a multiyear contract. My best friends live across continents and oceans instead of down the street.

If it wasn't for the internet, I don't think I would have been as prepared as I got ready to thruhike the the Appalachian Trail back in 1998. So, once I got back home, it only seemed right to post my journal and pictures on the web, not only for my family and friends, but for all those others out there with 'wanderlust' in their hearts. My website has changed a few times over the years, even going off the air for a bit. But I'm happy now with this blog format. You'll find all my trips here, the complete journals with tons of pictures.

It's easy to accumulate 'stuff' over time, but life is much more rewarding and fulfilling if you simplify. I'll post the occasional update, upload a few pictures and share a thought or link. All the trip listings are in the menu on the right side of the page. Please feel free to make comments on my Facebook page or send me an email (just look for the stamp up in the righthand corner to "see" my email address). I always try to answer every email I receive. Guess you'll have to 'wander' back here from time to time to see what I've been up to, but I think you will enjoy it none the less.

See ya' on the way....
Older Posts Home
Subscribe to: Posts (Atom)