Kind of a shock when the hospitalera turned on the lights at 6AM. Slept ok, but I always worry about my snoring in these crowded dorm rooms at the refugios. Left when there was light enough to see the route.

The Camino de Santiago is sign-posted in many places, but the universal sign is a yellow arrow painted on just about everything along the route, sometimes small sometimes large. You could do the whole Spanish portion without a map. But sometimes, especially in the bigger cities it is hard to see where the arrows are. 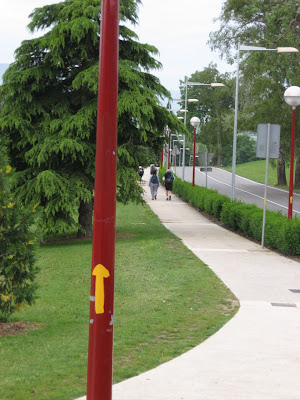 Just follow the yellow arrows
(or the other pilgrims in front of you)
This first day was going to be a real test for me. About two weeks ago in Almansa, I rammed my foot into the furniture, and it has been real sore ever since, especially if I walk on it too much. Not only was it a long climb out of the valley, but portions of the Camino were very rocky. 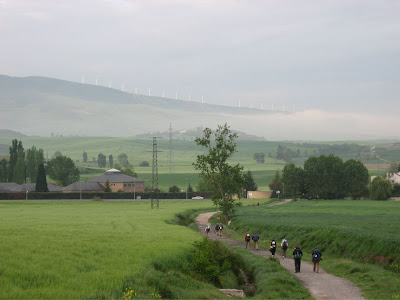 It didn't take long to get out of the city
Much of it was as I remembered from my pilgrimage in 2002. But the big difference was it is spring now. I see a lot more green in the fields and a lot of wild flowers. And the pilgrims are different too, lots of Germans and Spanish. 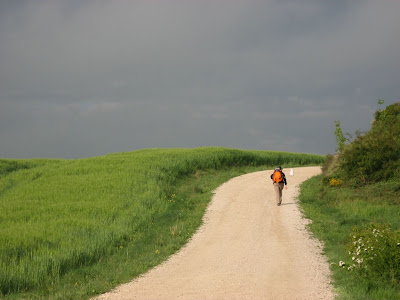 I will see scenes like this for the next month 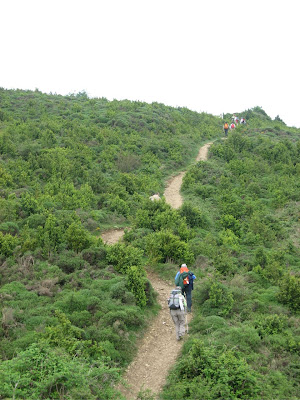 The first climb (of many to come)

The wind turbines made an eerie sound 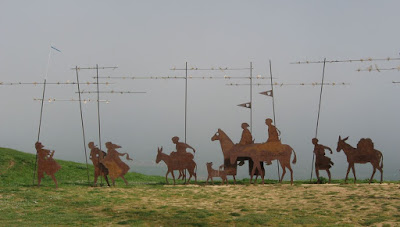 A reward for the climb, a tribute to the pilgrims
In Uterga, there is a private refugio with a cafe right on the Camino. As you can imagine, everyone was stopping for something. I thought the bar maid had the patience of Job to deal with so many customers who spoke absolutely no Spanish. Even when a few pilgrim tempers flared, she just repeated the words in Spanish real slow.

The weather was perfect, not too hot, not too cold and sunny most of the day. I had thought to stop in Obanos, but the refugio hadn't opened for the day yet and my foot didn't feel bad enough to stop this early. So I trudged on, with a quickness in my steps because of rain clouds in the distance. 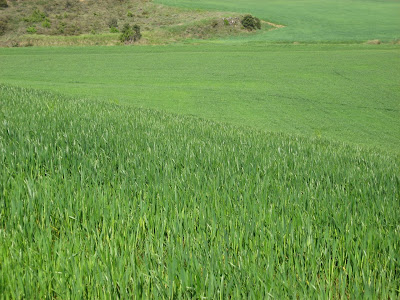 Everything is so green 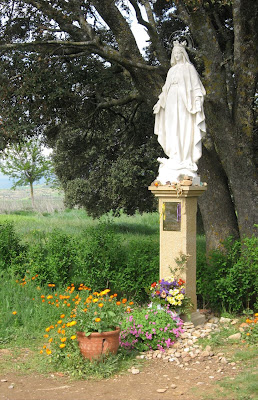 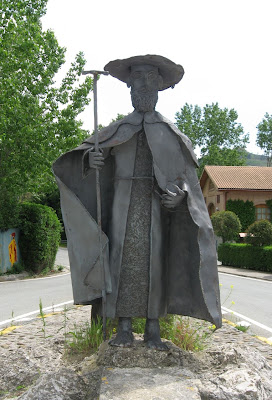 Pilgrim statue as you enter Puente la Reina
When I was here last, I stayed at the refugio run by the Padres Reparadores but I thought I'd try the private refugio on the other side of town, called Santiago Aposto. To get there, I had to cross the 11th century pilgrim bridge built by Queen Urraca. 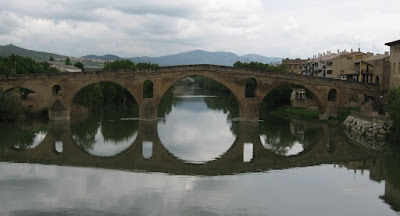 An ancient pilgrim bridge built by the queen
After such a long first day, it was almost cruel to walk up the long steep side road to the refugio. But I'm glad I did, it's a big, new airy place. And again, the folks running it have such patience with us pilgrims. Plus I was able watch a downpour from the comfort of a roof over my head.

Today I was adopted by a group of retired Germans. Frans and Hans are brothers. Frank was a truck driver hauling goods from southern Germany to England. His English even has an English accent. And Hans is a retired Physical Therapist. Even though he doesn't speak English, when he was talking about the problems in healthcare, I seemed to understand everything. Seems it's the same in Germany as in the USA. Paul is a semi-retired buyer. He and Hans have been lifelong friends since they served together in the military. They have only been on the Camino a few days but already they see how special it is. A wonderful group of guys.
Newer Post Older Post Home
The contents of this website are mine alone and do not reflect any position of the U.S. Government or the Peace Corps.