Fellowship of the Chainring 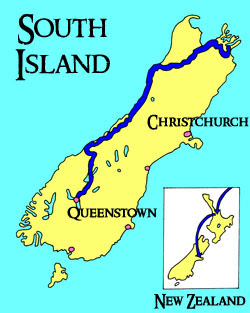 New Zealand is known as a 'Pedallers' Paradise', thus it has always been on my list of 'must see' countries. Our quest is to experience the beauty and hospitality of the South Island first hand. Meeting me in Christchurch will be Mike, from that other country 'down under' of Australia, and his brother George, from the enchanted land of California.

I met Mike & George during my first bike trip, across the USA (Show Me America!). That day in Afton Virginia, their enthusiasm and camaraderie gave my spirits a big boost that first week on the road. A few days later after George had to cut his trip short because of a bike wreck, I joined Mike as we road from Virginia to Missouri. Even though our routes separated then, our friendship has lasted ever since. But, when was I going to "come down and visit?" he always would ask.

So, I'm heading 8100-miles 'down under' tomorrow three weeks of biking and whatever other mischief we can find ourselves in. Did you know that the movies of the "Lord of the Rings" trilogy where filmed here in New Zealand? Just another reason to visit.
Newer Post Older Post Home
The contents of this website are mine alone and do not reflect any position of the U.S. Government or the Peace Corps.